Waverley Patchworkers hosted a fun filled two day workshop lead by Irene Blanck on the weekend of April 30, May 1. Irene had been the guest speaker at our March meeting and members knew that they were going to have a relaxed weekend. 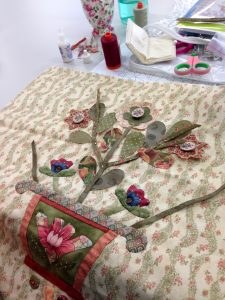 Day 1 was an appliqué class using Irene’s Miz Kelly pattern. The process involved preparing all the pieces for the block and attaching in place with glue before starting to stitch. No pins and no templates appliqué was new to many and all were keen to give it a go.

Throughout the day Irene demonstrated her needle turn technique, breaking it down into easy to manage steps. The method for making stems was very popular and at least one student was very happy with the improvement in her sharp points. 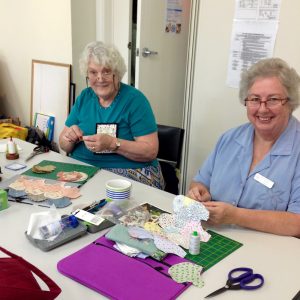 The second day involved Irene’s no papers approach to making and assembling the clamshell block. Again fabric glue was used to hold everything together before slipstitching. The many different fabric choices showed how this simple block is suitable for both subtle and bold designs.

This proved to be a very relaxed approach and participants quickly fell under the spell of the clam. 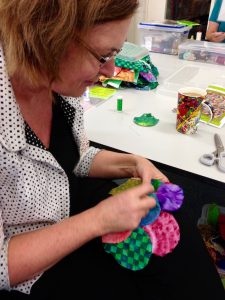 A minty wrapper competition on both days added to the fun, those who persisted were rewarded with one of Irene’s beautiful patterns. 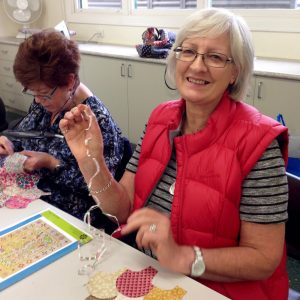 By the end of the Sunday the appliqué group were well on the way to finishing their first block and the clam stitchers were totally addicted. 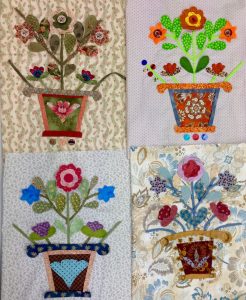 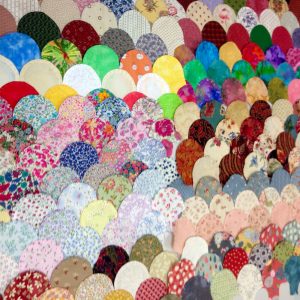 Waverley Patchworkers Inc is a group of about 300 patchwork and quilting enthusiasts located in the eastern suburbs of Melbourne, Victoria, Australia. We meet regularly to share our passion for all things textile.
View all posts by Waverley →
This entry was posted in Workshops and tagged Clamshells, Irene Blanck. Bookmark the permalink.