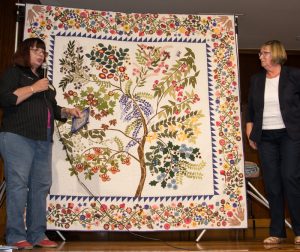 Guest Speakers at our March Monthly meeting were Waverley members Liz and Heather who are also members of the Lions Club of Quilters. They have been involved in The Journey project from its inception and told of the dream to establish a Quilt and Textile Museum here in Victoria.

This dream began after a 2011 trip organised by Annette Blake to various textile museums in the United States. The question on everyone’s lips was “Why can’t we have a museum like these ones in Australia?” The first answer was that we don’t have the strong tradition of philanthropy that is behind the American quilting museums. Undaunted a group of quilters decided that Lions International may be the organisation to assist. And so the Lions Club of Quilters was established.

With the centennial of Lions in 2017, they decided to make a quilt, to celebrate this occasion and to raise awareness of quilting and funds to go towards the dreamed of museum. Not ones to dither about, the quilt was designed by Maree Marr and work commenced in October 2015. It was finished in May 2016. The Journey will go to the Centennial Celebration in Chicago and maybe attract a significant sponsor. It will be accompanied by four panels of leaves, each leaf sponsored by an individual or a group in the manner of the Red Cross signature quilts. At the same time the Lions Club of Quilters are researching possibilities of a home for the museum, or for a museum without walls. It was quite clear from the enthusiasm and commitment exhibited by Liz and Heather that this dream will become a reality. 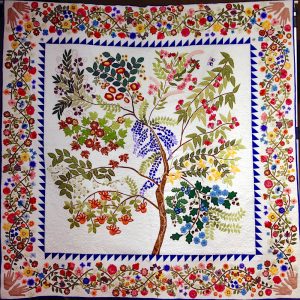 The quilt was made in four sections by a total of 25 quilters doing the appliqué. To give an idea of how enormous this task was, one white magnolia flower took four hours to appliqué. Each flower and leaf was then embroidered by Kirsty Beckett and it was quilted by Kerrie Thomas. In all it is estimated that 2000 hours work went into its creation.

Some of the symbolism embedded into the quilt was explained by Liz. As well as the foliage representing where Lions Clubs work, the language of flowers tell of the organisation’s attributes. The year 1917 can be found in the Olive leaves, 2017 in the Eucalyptus, the vine makes 100 and a message in braille along the trunk can be seen near the oak leaves. Butterflies found in the Sala and the Eucalypt are the symbols of the Deafness Foundation and Beyond Blue. The embroidered shapes in the flowers relate to sight, mobility and other areas of Lions work. The full story is available in booklet form and also detailed on the reverse along with all the makers names. 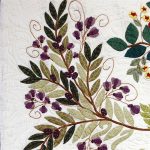 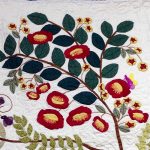 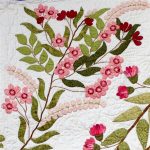 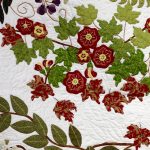 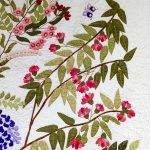 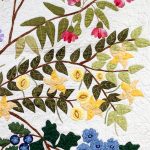 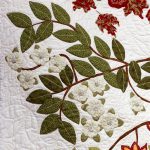 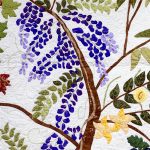 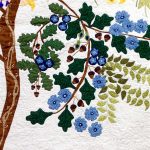 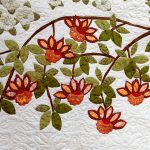 Attending the Monthly Meeting is always an opportunity to learn, this time it was about a new group of quilters with a very specific goal. We wish them every success.

Waverley Patchworkers Inc is a group of about 300 patchwork and quilting enthusiasts located in the eastern suburbs of Melbourne, Victoria, Australia. We meet regularly to share our passion for all things textile.
View all posts by Waverley →
This entry was posted in Meetings and tagged Lions Club of Quilters, The Journey. Bookmark the permalink.