A Visit with Morna Sturrock AM 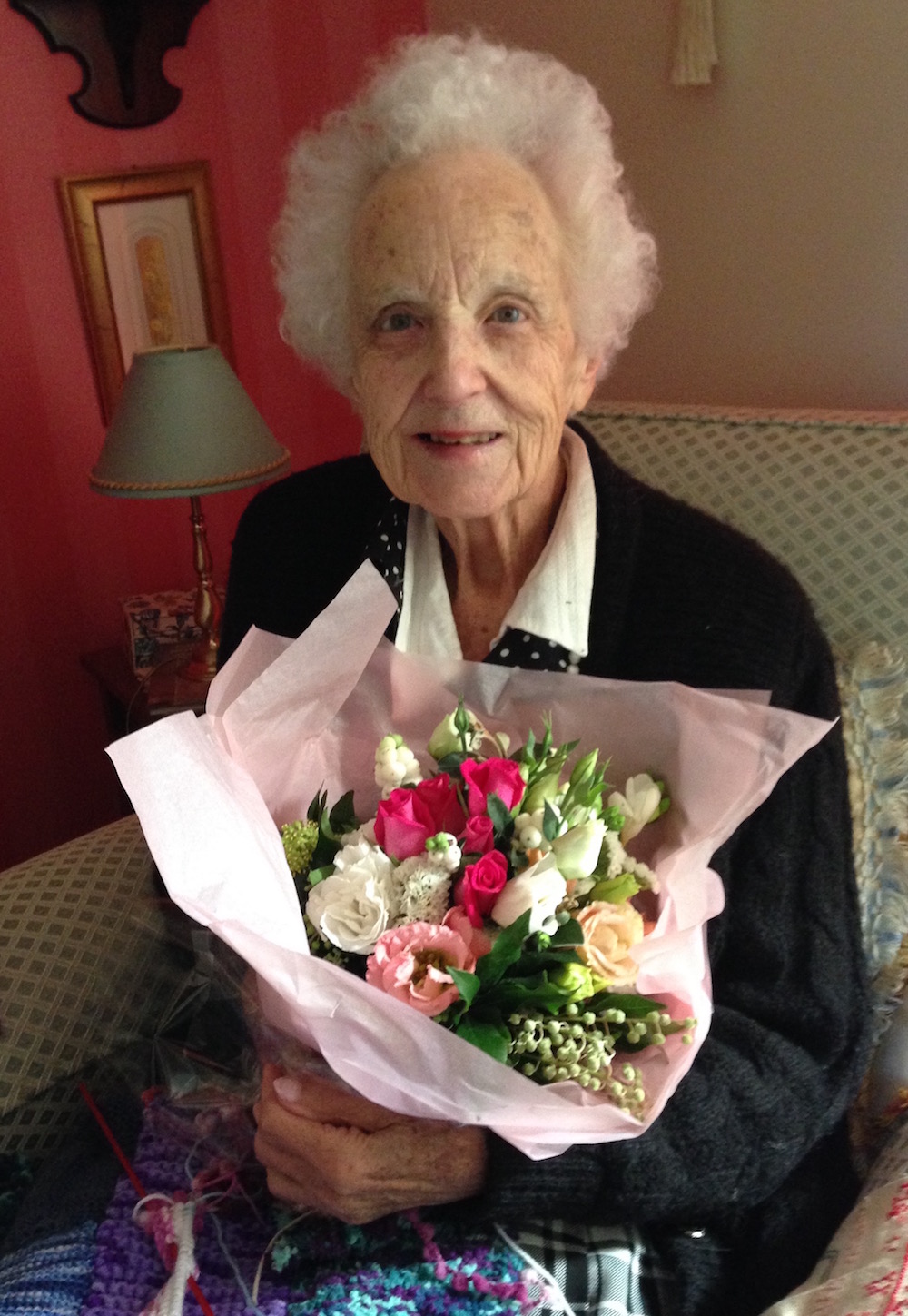 The Patron of Waverley Patchworkers has recently celebrated her birthday and members Lois and Jeanette paid her a visit as she is no longer able to come to our meetings, much as she would love to. Morna was presented with a bouquet of flowers from the group to mark the occasion.

When we arrived Morna was busy with her knitting in her front room surrounded by books, framed embroideries, layer upon layer of stitched work, sewing boxes, and of course flowers. The knitting she explained is a scarf for a girl which will go on a gift stall. It is made of smalls skeins of yarn, even just a length, nothing gets wasted. However it is not without a plan. Morna designs as she goes, doing a double thickness at the ends to give the scarf some body; then the she showed us where she will insert a row of bobble yarn. On the couch she had a collection of similar scarves, each made of beautifully toning colours and full of texture. Nearby is a cape she made some years ago, still in regular use. It is a knitted patchwork made from an amazing number of wools and stitches and embellished with knitted rosettes and buttons. Morna now knits rather than sews as she has found recently it is a bit hard to see to thread a fine needle. 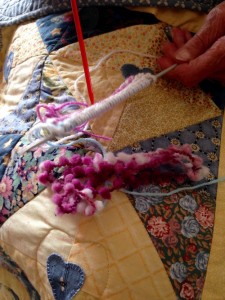 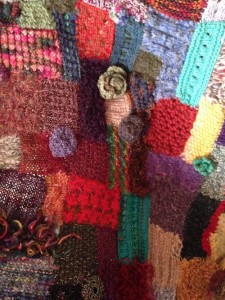 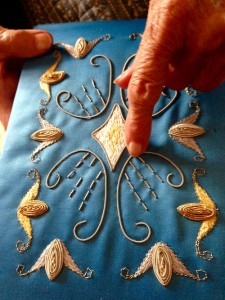 The heart quilt given to Morna by Waverley Patchworkers in 2010 is kept on a stool next the couch ready for afternoon naps. Moran asked for help sorting the contents of a large hat box. Out came amazing Goldwork samplers and Lace pieces mainly made by Ethel Oates, Morna’s mother and sometime teacher. A book cover worked by Morna in silver and gold was not very well made according to her mother, the fabric was too slippery, not suitable for the task.

In the early 1950s Morna went to London for work, she was a journalist, and she and her mother shared digs. Morna attended night classes a the Royal School of Needlework for four years and her mother was so interested in the exercises she enrolled as a day student. According to Morna it was a most interesting time to be a the school, the King had died and all the regalia for the new Queen was being made. It was here she developed her passion for Jacobean Embroidery. While most of the work on her walls is by other embroiderers, right next to the front door is this favourite piece worked by Morna. 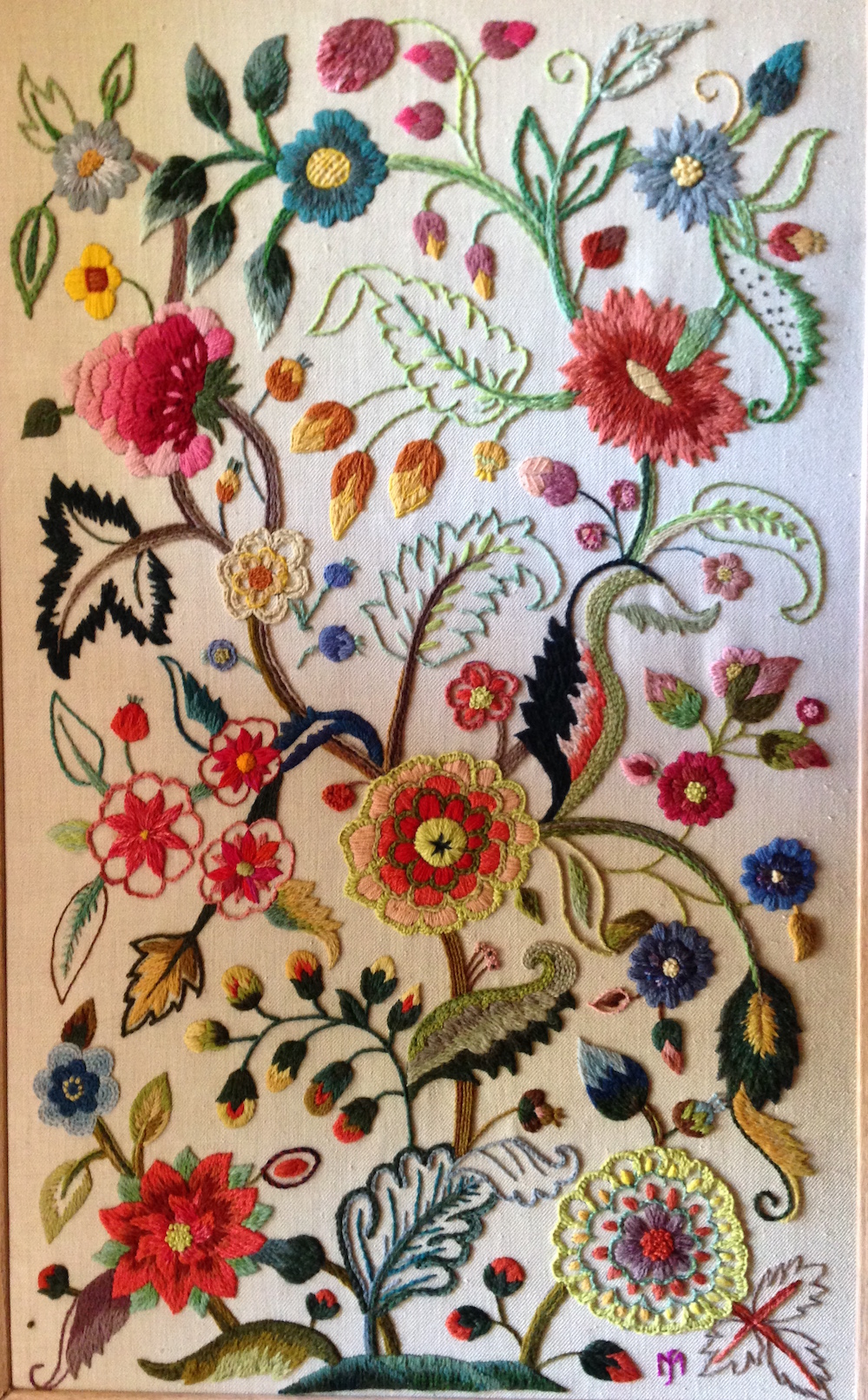 Morna takes a keen interest in the activities of Waverley Patchworkers, she is proud and amazed by the all work we do both creatively and for the community. Her words of encouragement are that “If you have something to do, then you have a future”. This may become my justification for all those UFOs lurking in my sewing room!

I hope you have enjoyed this visit as much as I did,
Jeanette

Waverley Patchworkers Inc is a group of about 300 patchwork and quilting enthusiasts located in the eastern suburbs of Melbourne, Victoria, Australia. We meet regularly to share our passion for all things textile.
View all posts by Waverley →
This entry was posted in News and tagged embroidery, knitting, Morna Sturrock. Bookmark the permalink.